When I set out to form a quilting group in 1977, I didn’t know what it would look like. I placed ads anywhere I could, asking people who were interested in forming a guild to contact me. The response was pleasing, and I met interesting people who were already making quilts, mostly in small groups.  What they wanted was a meeting place where they could learn new techniques from others and compare and exchange patterns while enjoying a social experience along with expanding their knowledge of quilting.

Initially, there was a small core discussion group which included Wendy Wulff, Michelle Gallagher, Mary and Louise Frick, Monica Rieger and myself.  Art and Vera O’Keefe came on board a little later. When we had agreed on some basic premises for the guild, we advertised our first meeting in Surrey. To our amazement, quilters came from as far east as Squamish and all the way from Vedder Crossing in the west. We were thrilled!

The longevity of the Fraser Valley Quilters’ Guild has demonstrated that quilters want to expand their knowledge within the context of a social connection. From the beginning we had planned for a library, newsletters and classes, but it was the brilliance of the quilts and patterns to which teachers from all over the world would introduce us that raised the guild to another level.

I am grateful to the subsequent members who recognized the many ways the entity of the Guild, through the diversity of its membership, could contribute to their communities.  Every year the Guild donates a modest sum to a chosen charity. Over the years, various programs such as the Preemie Quilt project were introduced.  This initiative alone has donated over 10,000 quilts to the preemie units of various hospitals. Members have also contributed quilts to Cops for Cancer and The Vancouver Writer’s Exchange, along with supporting many other charitable causes.

I could never have foreseen how the substantial gifts of time and talent along with the incredible generosity of our community-spirited members would transform the Guild and firmly root it, and its members into such a force in the community.

I feel humbled by the beautiful spirit and gracious, creative hearts the members have exhibited in planning, piecing, displaying and donating their quilts for almost half a century!

My mum was Jessie Daveen Kelly (called Daveen by everyone except the healthcare system) and I think she was member number 16.  I probably have her membership card somewhere in the depths of my family mementos.  She had been recently widowed after some lengthy time caring for my dad who had cancer and she was looking for something to do with her suddenly free time.  Someone she knew took her off to the meeting and even though she was financially disadvantaged she managed to be pretty prolific.  She pretty much only made log cabin quilts – 1 for each of her 21 nieces and nephews as each of them got married.  She also did a few cathedral window cushions and a quilted vest and bag for me.  She LOVED green and I wasn’t always impressed with the combination of lime green and spruce green  .  She only stopped quilting when she had a bad fall and shattered her left wrist so that it had to be fused into a position that wasn’t useful for quilting.  I still remember Mary Ann visiting her in the hospital with a pile of quilts to show her.

When my marriage started to break down, I moved to be nearer to her and she encouraged me to join the evening group which had just started.  I think I started with the first or second evening meeting.  Mum encouraged me to take one of those sampler classes where you learn a different technique each week as she always said she wished she had taken one.  I was sorting some old photos over Christmas and can see just how far I have come from those first, rather ugly, quilts.  Now a days I do more art quilting and english paper piecing.  I think Mum would have really liked the EPP but not been too sure about some of the other stuff.

Ever since, I have used quilting to make new friends wherever I moved.  I was a member of the South Australia group and joined the Quilter’s Guild of the British Isles as soon as I moved to the UK.  I am now a Trustee for the Quilter’s Guild of the UK.  I encourage everyone to plan a trip to the UK during the Festival of Quilts which is 18-21 August this year and right beside the Birmingham Airport.  Not as big as Houston, but much more innovative and very different.  You’ll need at least 2 days.

FVQG came into my world in 1982. My husband had retired from the service and we returned to my family home in Vancouver that was my inheritance.  Prior to this we had spent 7 years in Cold Lake where I had learned to quilt, and was involved with quilt shows, teaching basic quilting and held several other community service positions from Library chair, councilor for PMQ Medley River, Red Clay rep and volunteer wherever in the busy community.

Vancouver was different, the stress of learning to become citified kept growing and I became fearful. So, to keep focused on something I knew how to do, l took a quilting class from adult ed, and to remain, had to do each project in a more advanced way because the young instructor was unsure of what I might be there for. The bonus was that I learned about a jacket class by Frances Forniae that lead to a Barb Fraser Bag class that had me invited to come to a Lassie Whitman lecture. Lassie specialized in clothing and was the ultimate “made by loving hands” quilter.

Wouldn’t you know, I won a door prize! Lassie’s prize made me feel guilty but excited looking around Guildford library, seeing all the techniques that I didn’t know how to do and hearing there were workshops, I was caught!

June came and to my first of many quilt shows I brought in a landscape on a frame and invited anyone to quilt. You did not need to know how to quilt or have fine stitches. This was an experience and I still have the piece, along with the memories of the smiles and the wonder that there was a quilt waiting to be quilted.

I took my first quilt class in the Spring of 1988 in Vancouver.  Shortly thereafter everything was packed when I bought my condo and moved to New Westminster. I knew of a cross stitch shop called Stitches ‘n’ Things in Middlegate Mall in Burnaby and found they also did quilting.  They had a drop in Sit and Stitch that I joined, first working on mohair teddy bears and then I took another quilt class. Here I met Ethel Snow, Tricia Brown, Shona Kelly and Linda Dubois (owner).  All were members of FVQG and took me to my first meeting at the Surrey Library probably in 1989.  I joined shortly after.  Linda was the person who found our new home for meetings at Cedar Grove Baptist Church.

I remember sitting around Tricia Brown’s dining room table learning how to hand quilt on the FVQG raffle quilt. I attended evening meetings and at one the evening secretary announced she needed to step down and I offered to fill her spot. One distinct memory was having the day off so I could attend the day meeting and turning on the TV as I got ready and watching events of 911.  Allison Van Sacker chaired the meeting and called for a moment of silence.  It was a very subdued meeting.

I also recall our various community sit and stitches at the PNE.  Queensborough Community Centre Fall Fair quilting with Lynne Fanthorpe and others. Sitting at Fraser Fest on the New Westminster Quay.  I was vice chair then chair of the evening meeting when Lynne Fanthorpe was Present and then became President.  During our 30th anniversary year I bought 30 items at the dollar store and gave them away each meeting. This was after we moved our meeting to the Firehall Arts Centre in Delta.

I also remember appliquéing on a quilt at Linda Rothe’s after the quilt had been machine quilted.  The appliqué sat up from the background.  Linda taught me my favourite way to appliqué using the freezer paper and starch method. I recall taking many classes with different teachers that the guild brought in and also local members and designers in our area.  I also recall being in the test groups when we organized quilt retreats at Rosemary Heights and Harrison Hot Springs Hotel.

Our 45th Anniversary Sapphire Celebration was great fun for everyone!  We had lots of visitors who came to see our beautiful sapphire quilts that will be donated to the Surrey Pediatric Emergency Ward. They bought a few mug rugs, shopped at our members boutique and member vendors tables, and got a chance to stop for coffee and a cupcake and spend time visiting with friends they hadn’t seen for over 2 years!

Thanks to all our volunteers for making this such a successful event. 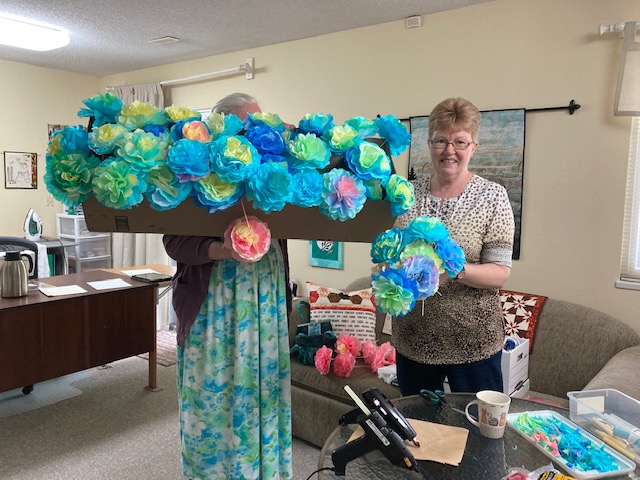 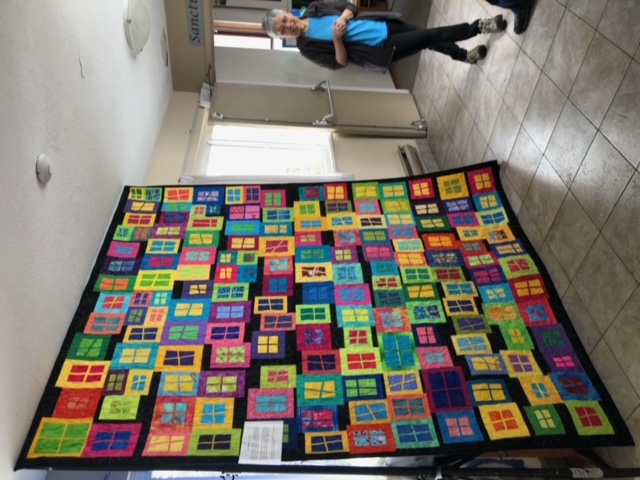 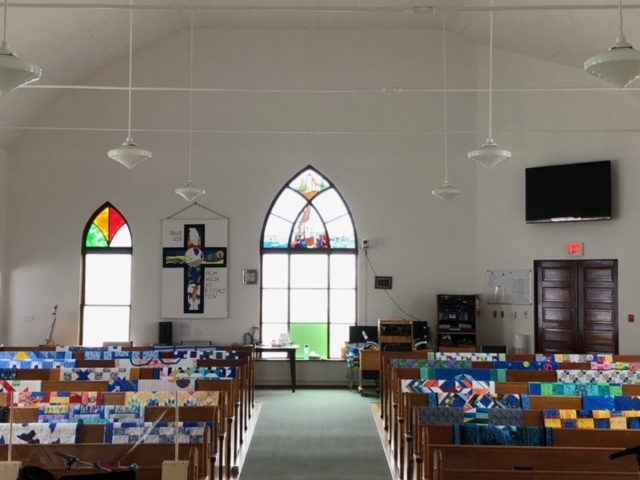 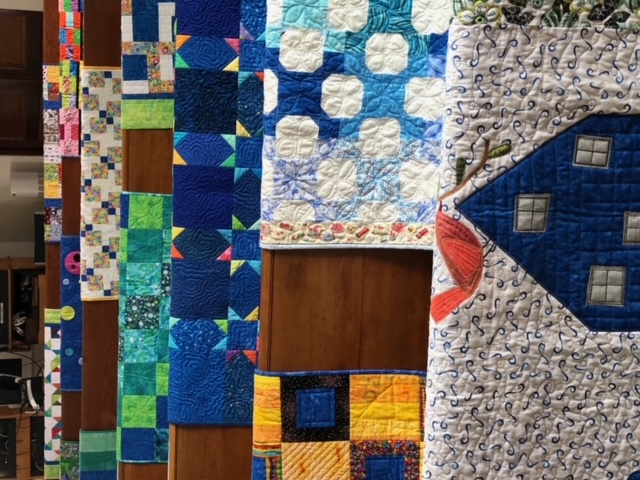 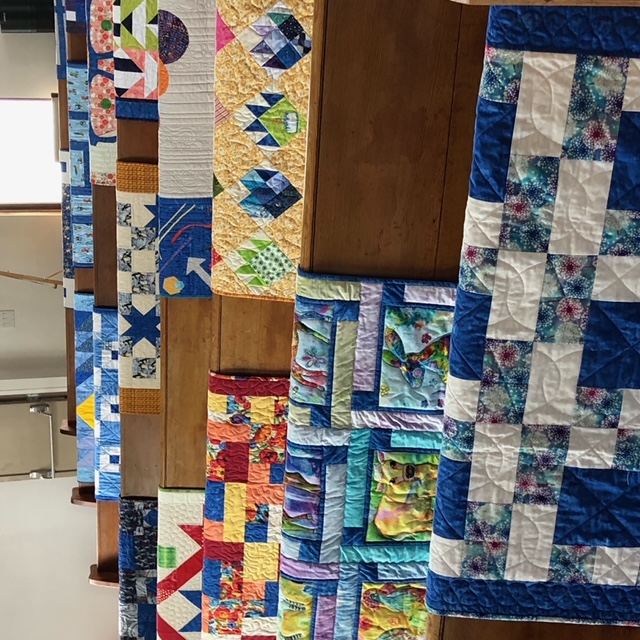 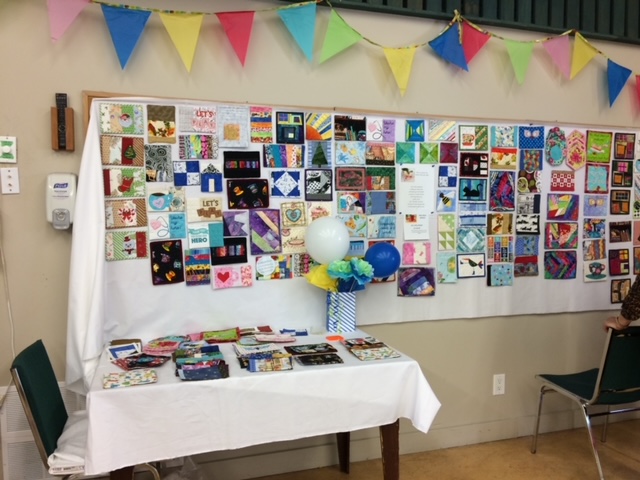 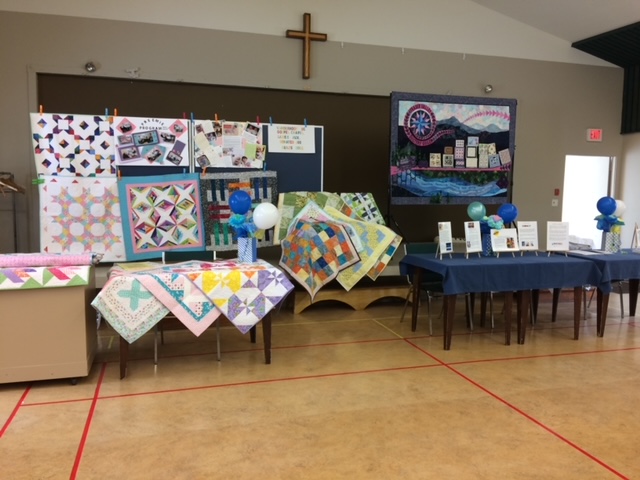 See you all on May 28, its going to be awesome!

Lorraine Wilson will be our host.

Come join us for tips, tricks, who’s who, and who’s doing what in the Fraser Valley Quilters’ Guild world.

Bring your creative to the meeting. FVQG will supply postcard making materials, and some embellishments. Please feel free to bring your own supply of embellishments, fabric, writing utensils etc.

Lily Wong will be presenting over 40 quilts.