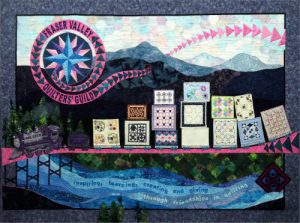 The year of the guilds 30th Anniversary, Val Smith and I decided to make a new banner as an anniversary present for the guild. The current banner was showing its age and I had been thinking about making a new one for a while so this was a perfect opportunity.

Our thought process was simple. We wanted to have the Guild Logo and colours, represent the Fraser Valley and somehow incorporate the different styles of quilting from the guilds 30 years. After drawing up a plan we worked on different parts separately and then got together to put them together.

During this process we added a train and decided we wanted to have boxcars on our train. We wrote letters to 15 guild members that we knew had worked in miniature and asked them to help us with a project we were working on by making us a small quilt. We didn’t tell them what we were going to use them for so it would be a surprise but did give them some guidelines. We needed them a certain size and asked that they be light in colour as we knew they would be in front of the dark mountain.

During the June Guild meeting we had the banner there and covered. After we told the membership that we had an anniversary present for them we unveiled the new banner. As we watched everyone looking at it we were interested in watching the ladies who had made us a miniature quilt as they looked to see what we had done with them. One lady had a very disappointed look on her face as she didn’t see her quilt. Val who was standing beside her, whispered in her ear “When you don’t follow the rules, your quilt falls off the train and ends up in the water”. She was quite happy after that to see her quilt floating.

Inspiring, Learning, Creating and Giving through Friendship in Quilting

The words in the river were to represent the Guilds Mission Statement and are still relevant today, 15 years later. 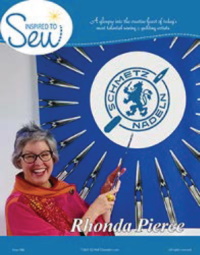 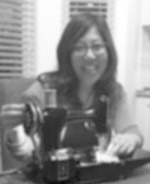 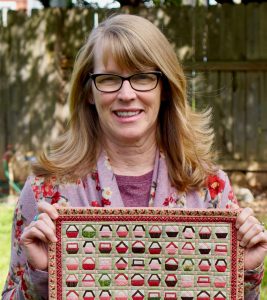 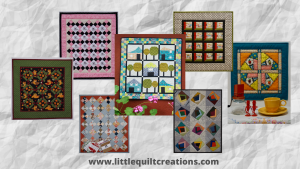